This demo project showcases the capabilities of Microsoft HoloLens for product presentation and educational purposes.

Business goals: Engagement and retention of customers via presentation of products in the mixed reality environment

Product: HoloLens application that allows the user to interact with digital 3D models + back end used as to store and send models to the application as Unity bundles

This demo originally aimed for presenting industrial and medical equipment in mixed reality, as well as for interactive learning. Check this video to see the HoloLens in action!

It is worth noting that later on we created a second mixed reality demo that enabled a shared virtual space involving a desktop, a HoloLens, and virtual reality headsets. It is worth mentioning that HoloLens software development shows promise for remote education, VR conferencing, entertainment, and even marketing. 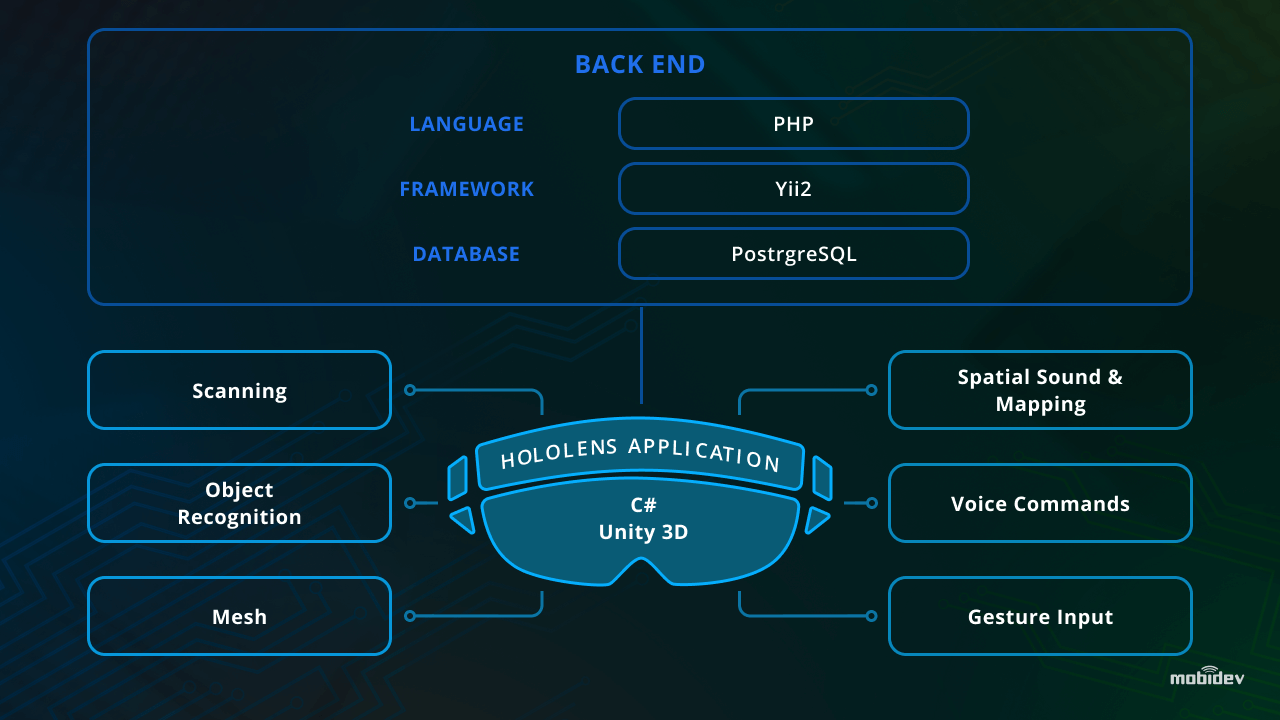 Revealing the potential of Microsoft HoloLens for industrial use

Formation of a technology stack was quite obvious for this case. The combination of C# and Unity 3D is endorsed by the official Microsoft tutorials for HoloLens development. Additionally, we used such specific libraries as MixedRealityToolkit-Unity and MixedRealityDesignLabs_Unity. The server side for this particular demo was written in PHP; however, any general-purpose programming language for Web would work.

Worth mentioning is the use of Lua to write dynamic scripts that enabled custom interactions with models outside the bundles that contained them. A good example of such interaction is removal of an element or a layer (e.g. the hood of a car) in order to see what’s behind it.

Getting the most out of hardware capabilities

Every feature of the HoloLens has been mastered by our team: scanning and object recognition features, voice commands and gesture input to make control more natural, spatial sound and mapping to make environments more realistic, and the tools to develop native HoloLens applications of any required functionality. Furthermore, it should be noted that the launch of the HoloLens 2 will propel the trend of headset-based AR forward with new capabilities.

In order to make the product as smart and responsive as users would demand it to be, we complemented development with our elaborate testing procedure. Our QA team created a testing environment required to check scanning of various surfaces, creation of meshes in different rooms, occlusion, object recognition, and, of course, interactions between the user and the software. The process can be tailored to particular requirements of any project.

Microsoft has recently unveiled its new HoloLens 2, a product running on a brand new platform that has made significant improvements over its predecessor, the new HoloLens 2 looks to be a convincing call-to-action for Augmented Reality development across the business space—that’s why we were bound to update this post with the essential information about it.

Boasting a redesigned headset and display, the HoloLens 2 dramatically expands the user’s field of view with two large 2k displays, one for each eye. This enables much more interactivity—and far fewer limitations—than the old HoloLens headset. Usability has also improved with faster response times and a snappier UI thank to a Qualcomm Snapdragon 850 sitting at the heart of the device. Planned Microsoft Azure integration gives the headset potential for innovative use of cloud services.

This expanded field of view fixes one of the major complaints with the original HoloLens display. The limited range for the old headset made AR objects clunky and often uncomfortable to work with. It was unnerving to be trying to manipulate an object on one side of your view, only to have it disappear when you turn away slightly to work with another. The new headset’s larger displays help to solve this problem, and it’s clear just from looking at the headset itself that a much more immersive experience awaits. It looks closer to a full-on VR headset than the smaller profile of the original HoloLens, and the wide field of view combined with a much closer display provides very real AR experiences that the original wasn’t able to deliver.

Another highlight for the new device is a wider range of controls and a number of refinements to both gesture tracking and eye tracking. When interacting with virtual environments, your movements with objects in AR have to sync well with your actual hand movements. With improved gesture recognition and an expanded range of gestures these actions feel much more natural than they ever could.

The HoloLens 2 adds support for natural gestures, like using both hands to expand or resize a window, or simply grabbing an object and dragging it like you would in real life. This direct manipulation will go a long way towards helping AR users feel naturally immersed in their environments.

The addition of improved eye tracking will also enhance the natural feel of the headset, letting users scroll through web pages simply by looking down towards the bottom of the page. This, combined with voice recognition and virtual assistance, make AR a powerful tool for increasing productivity.

Made from lightweight carbon fiber, the HoloLens 2 is lighter than its predecessor, and will feel much more comfortable to wear for the majority of users. It’s easier to adjust, has a re-balanced center of gravity, and even lets users wear spectacles underneath the visor. A reworked cooling system keeps the new hardware running cool for extended wear. These are some of the major obstacles that prevented the original device from more mainstream use.

Microsoft plans to debut the HoloLens 2 at a price of around $3,500, putting it outside the reach of many casual enthusiasts but directly within the budget for enterprise applications. With the improvements made to the headset, it will be interesting to see where AR trends find a foothold this year.

Without a doubt, Microsoft should keep upgrading the hardware capabilities of the HoloLens – for example, equipping its next generation with an increased field of view, which proved crucial. Another step towards the breakthrough on the corporate market is making the headset more affordable, even by enterprise standards. Eventually it will pay off, since the spheres of possible application include industrial environments, manufacturing, medicine, architecture, interior design, and gaming. 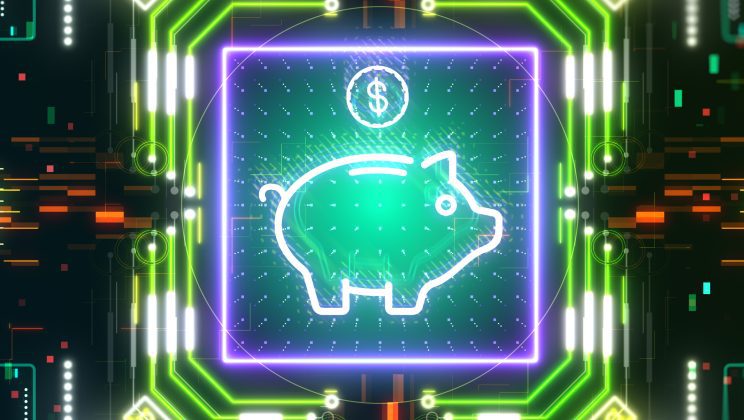 Top Fintech Trends of 2022: The Power of Technology to Transform Finance

As one of the most disruptive industries, fintech has significantly changed the way we interact with financial companies over the past decade and hasn’t stopped there. Each year brings us new innovations designed t 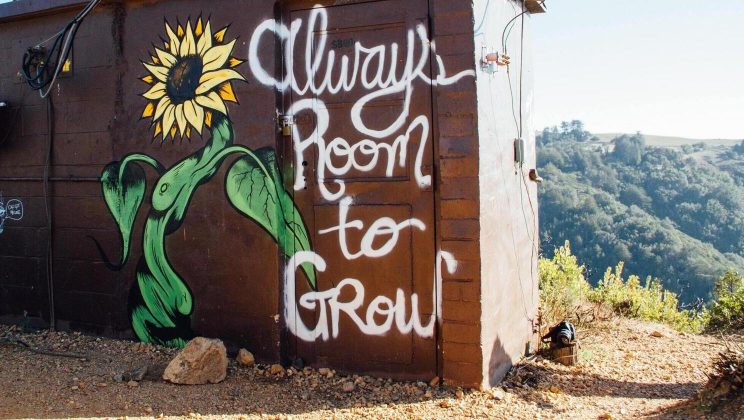 The correct choice of infrastructure for a tech-based startup may help to cope with unpredictable user base growth, volatile demand, and server load. In other words, it’s crucial for scaling. And you should take a hard l 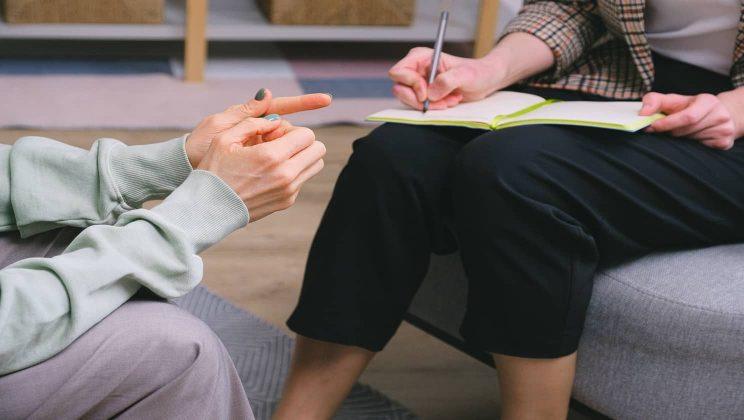 MobiDev would like to acknowledge and give its warmest thanks to the DementiaBank which made this work possible by providing the data set. Mental illnesses and diseases that cause mental symptoms are somewhat difficult t